Interview with a Technical Artist

We’re very fortunate here at Gamma Minus to have the talented Antoine Guillo on the team! Antoine bridges the link between art and development for Cold Comfort. You can follow him on Twitter.

Could you tell us a bit about  yourself?

I’m Antoine, from the west of France. I’m 25 and I started game development four years ago at university. My first contact with game development was with art – 3D modeling. But I already preferred coding. Back then I had my hands on Unity for a couple years. My third year was at ESCIN, fourth and fifth at ENSAM.

What made you want to go to school for game development?

I actually have an electronic background but I wanted to do something a bit more computer art oriented. I started with web development but it wasn’t really my cup of tea, so I switched to game development, because I was (and still am) a gamer at my core. Then the Oculus Kickstarter happened. I was f***ing hyped, and I knew there was a Realtime 3D modeling school in the city I’ve been studying web development, so I applied, and did that for a year.

I had one of the first Oculus Rift Development Kits in my hands pretty soon, thanks to our teachers, and it was a blast. I knew I had to work on Virtual Reality stuff at the end of the year, but I wanted more, so I applied for a Masters at ENSAM specialized in Virtual Reality and new interfaces, which I aced! It’s actually a very big engineering, and they have loads of branches in France like mechanics, craftsmanship, energy and one branch doing VR and interfaces, which was in the same city as the two other schools I’ve been in.

Two awesome years they made my teeth on Unity, and I started using Unreal Engine for good last year. Also I did an internship at Technicolor last year, and I have a pending patent as well, thanks to the research I did at Technicolor. Right now I have a full time job in a building engineering company. I’m doing the Virtual Reality visualization of the building information modeling data. I’m a team of one, so it gets pretty heavy sometimes depending on how much stuff there is to do.

What originally made you want to become a technical artist?

I’ve always been interested in programming and 3D techniques, so I guess Technical Artist was the perfect match! In my past projects I was also involved on all fronts at once, be it technical or graphical.

What made you want to help with Level Design in Cold Comfort?

Cold Comfort gave me the opportunity to not leave my Game Development roots and since I’m working on both jobs with UE4, it’s a win-win situation. I learn new things from both projects. I’ve had a blast on games like Left 4 Dead and Killing Floor and I’m a pretty hardcore guy when it comes to simulations. Also been a big DayZ player – I love survival games!

Could you describe your work more precisely?

As a technical artist, my job is to be the link between art and development. I’m helping our artists to integrate their assets into the engine, giving some tweaks to materials, adding new special effects and so on. I helped a bit with QA, too on assets, animations and more. I’m also in charge of optimization for the game and I did a good chunk on lighting too, like for example the time of day setup. The game is using 100% dynamic lighting, which is gonna be a requirement since we’re gonna have some real time destruction, and also uses a new tech, that was implemented recently in UE4, called Distance Field Rendering. Our lighting uses it to boost performance AND visuals, and it can also be used for fun stuff like the raindrop surface detection.

So you’re still working on the weather right now?

Yes. I’m tweaking our materials, so they can be affected by rain and snow. Since the weather is actually a plugin, there’s very little to do on our end. For the weather, I’ve been integrating a material function into the materials we already use. Since a lot of our materials are different, most of them need to be tweaked manually. But I’m also tweaking the dynamic day night cycle, which is fun.

Describe what you mean by ‘materials’.

Basically, a good part of UE4 is based on a visual programming interface that uses nodes. Materials and script use these. Each texture is plugged into these nodes, and then we apply math stuff and functions to them. The weather system is linked to a function and I’ve been integrating this function into the already existing materials.

What programs do you use on a daily basis?

My daily trifecta is Unreal Engine 4, 3dsMax and Chrome! Gotta get a good load of references and docs when doing Tech Art stuff!

Just to wrap this interview up… What are your favorite games?

HL2 was my introduction to FPS and I played the f* out of Rollercoaster Tycoon! Right now Dota2 is my go-to game but I also spend time on my Switch. 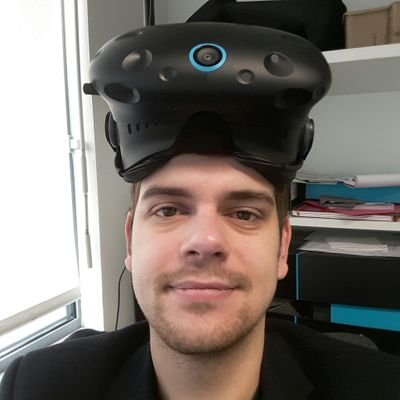 Believe it or not, Antoine does have eyes under his VR headset! You can follow him on Twitter.

Dev Diary #7: Bangin’ It Out
Scroll to top