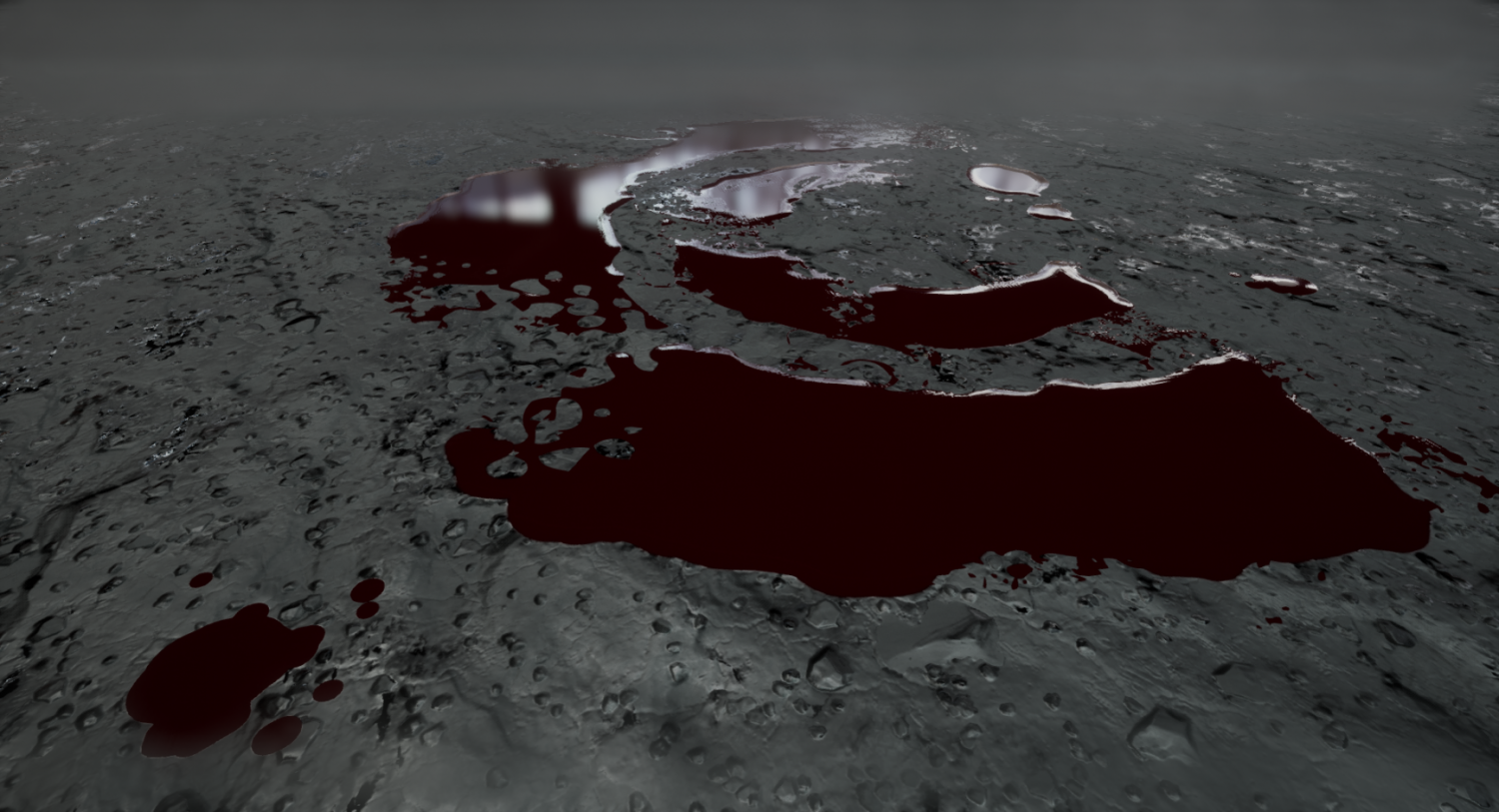 We’ve been busy these last few weeks, and we thought we’d share some of our progress with you in this ‘lil devblog. The game is really coming together, that’s for sure! There’s been a lot of progress, but we still have a long way to go. Putting together a map is one thing, but adding all of the nuances that are required to ensure that it not only works but is fun is a whole other ball game.

Cold Comfort is a multiplayer game, and a bit part of getting things working is making sure that the matchmaking is solid, that’s why we’re currently running tests. We want to make the transition as seamless as possible, and straightforward for the players.

We’re also busy working on the core mechanics of the game, including barricades, infection rates and electric fuse box mechanics. We’ll be sharing more of these core mechanics with ya’ll in the coming weeks, so stay tuned.

It goes without saying that all of the images, videos, GIFs and gameplay descriptions do not necessarily represent the final version. Cold Comfort is still in the pre-alpha phase and the game will evolve over time.

What is a sound effect? A sound effect is a signifier, an aural cue designed to trigger a response in the brain. This combined with visual stimulus can have a profound impact on an audience. There are multiple examples of seemingly irrelevant recordings being used to amplify unrelated pictures such as bacon sizzling on a frying pan to reproduce the sound of rain, or celery snapping to get that spine tingling broken bone. However, sound effects don’t always have to represent events from the real world.

How do you get the stroke of midnight to sound terrifying? How do you get the sunrise to sound hopeful? Audio designers rely on certain sounds being associated with feelings, this can be referred to as a schema. Foxes screaming mixed with the impact of metal on wood laced in a distant reverb can give you the impression of being alone at night with something hazardous and sinister lurking. Birds chirping with a light summer breeze may conjure a feeling of whimsical happiness and relief.

These combinations of schemas mixed with some experimentation and audio effects can produce unique sounds that may have never been heard before but instantly signify precisely what they are intended to. Take Ben Burt, the legendary Star Wars sound designer. An elephant’s trumpet mixed with an engine and you have the unmistakable sound of a TIE fighter. The sound of a projector humming being played through a speaker and recorded with a microphone on a stick is now the iconic lightsaber. These distinguishable audio cues have been burned into our minds regardless of the fact they have never and will never exist. In my opinion the sign of a good sound effect should be instant recognition. The sign of a great sound effect should broaden your schema.

We started working on Seneca, our Alpha map back in July (2017) and it’s gone through a number of iterations. First of all, in its present state, the map is rather large. The size may end up being a hindrance, however we feel as if we can always scale it down, if need be, scaling up would be somewhat problematic, so we’re going to have to do some testing to find the right balance.

Seneca has a number of POIs (Points of Interest) which can be categorized as either Primary POIs or Secondary POIs. Primary POIs are the Gun Store, the Hardware Store and the Doctor’s Office. You can scavenge for supplies in these POIs, and find weapons & ammo, building supplies or medical supplies, respectively.

Having adequate supplies as a Survivor is essential in order to be properly prepared.

The Secondary POIs are currently the Police Station, the Church,  the Damn Control Tower and the Hospital (which doubles as the Gamma Prime spawn point). Additional Secondary POIs in discussion are a radio station, a movie theater.

These locations each offer unique gameplay mechanics. For example, the Police Station has a CCTV Control Room. If and when the Survivors get enough electronic parts, they can use them to put the CCTV system online and then they are able to get a complete overview of the map, giving them a great tactical advantage.

The Church is an easily fortifiable location, and gives the Survivors a major height advantage. Additionally, the church bell can be rung, and all zombie AI in the immediate vicinity are drawn towards the church, which is great for distractions.

The Damn Control Tower has one of the three available long range radios, which the Survivors can use to call in an extraction.

The Hospital, (which we previously mentioned) is also the initial Gamma Prime spawn point) is also an interesting POI for two reasons. Firstly, Survivors can obtain experimental vaccines from the lab in the basement. This vaccine is a “one shot- one kill” when utilized against the Gamma Prime. In addition, when the Gamma Prime respawn, they lose 20% of their stats (for the match). Secondly, there is a quarantine lock down mechanism.  When the Survivors utilize the electric parts, and activate the lock down feature, then they have 1 minute to leave the hospital until it is completely locked down. By doing this, the Gamma Prime lose their spawn point, and they get a new one which is further away. 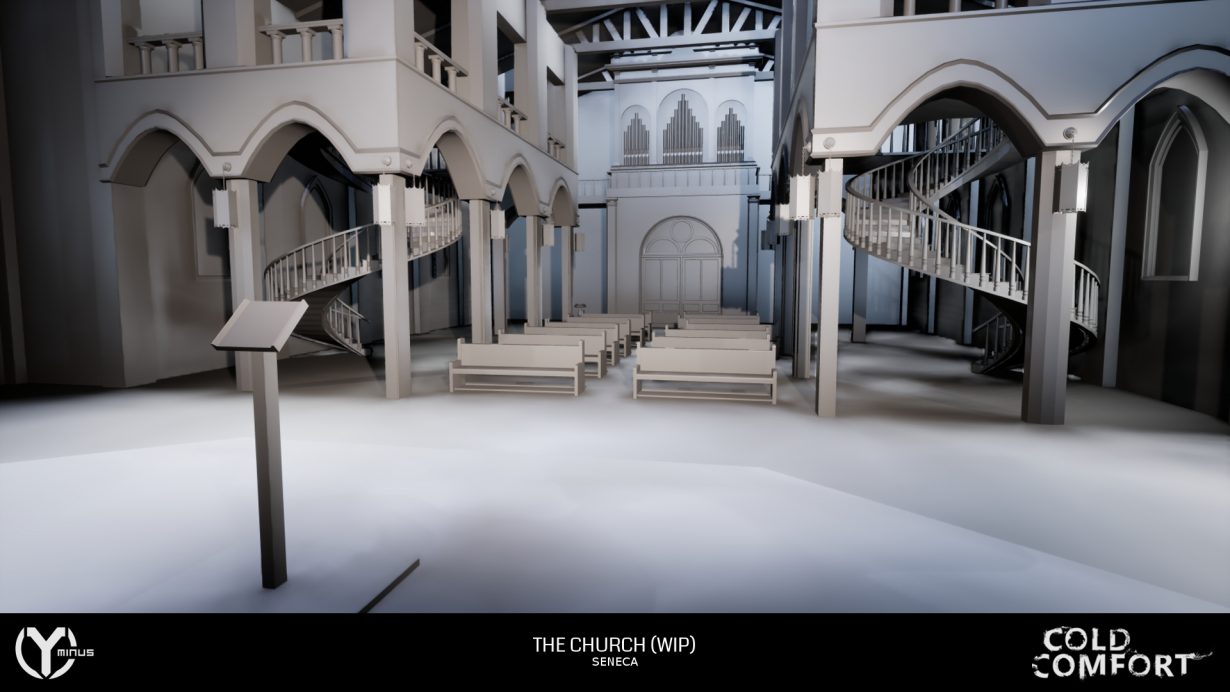 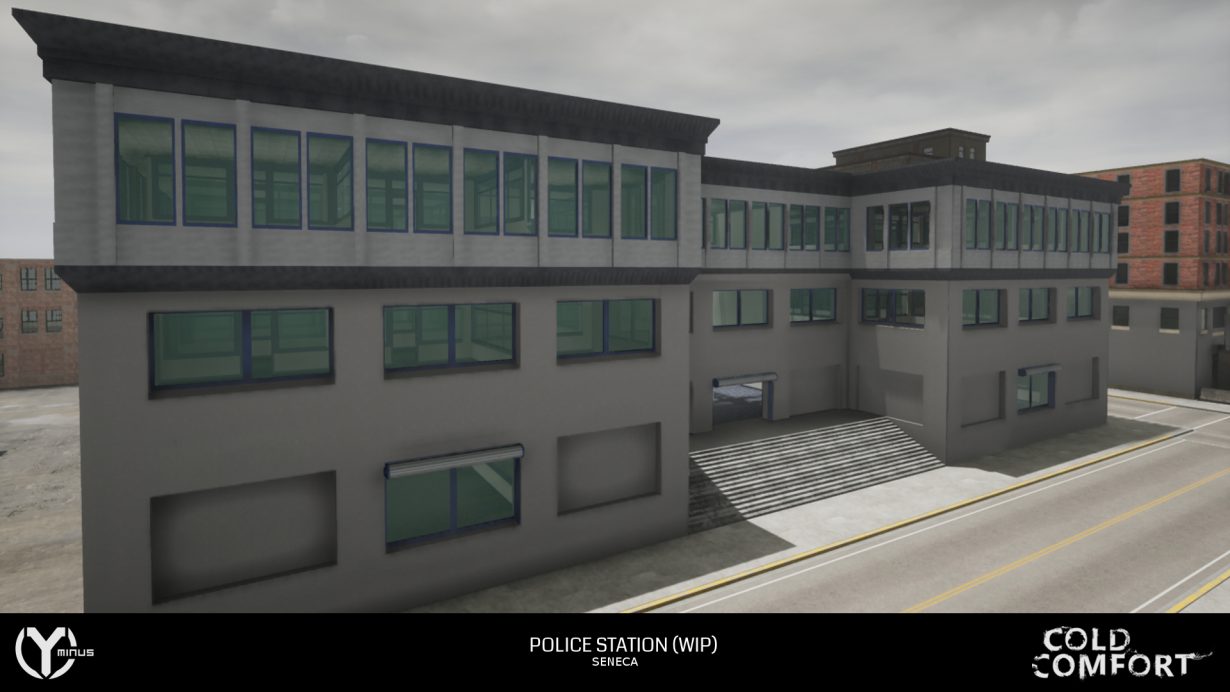 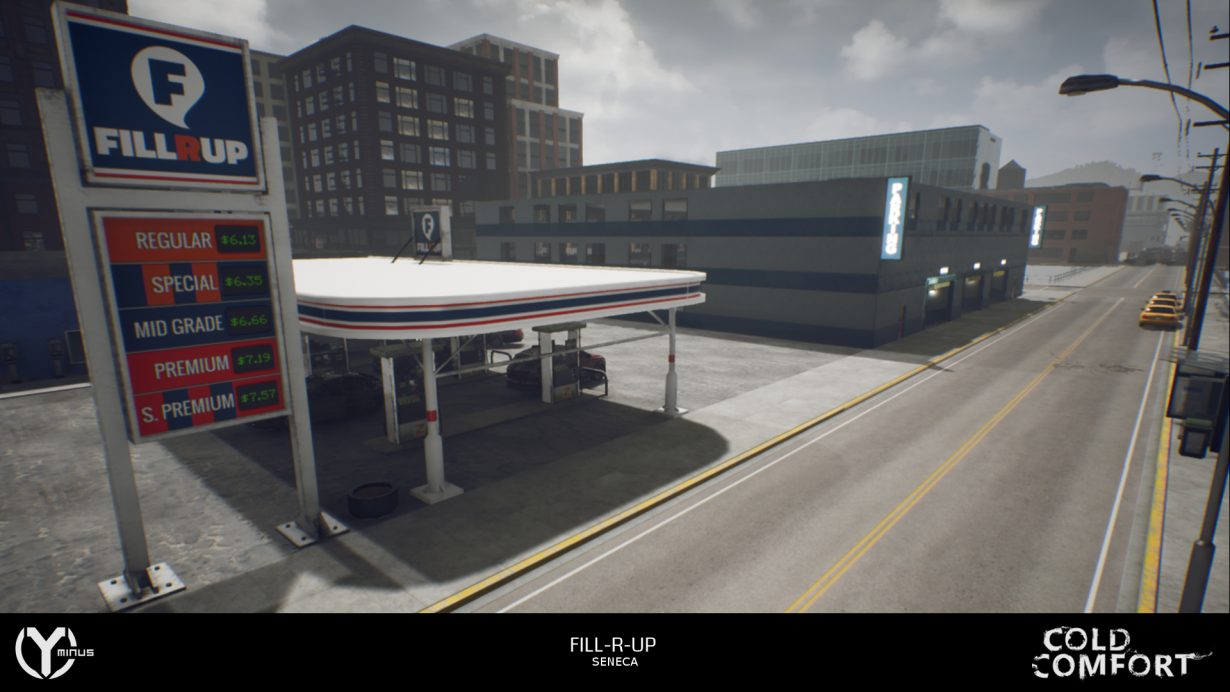 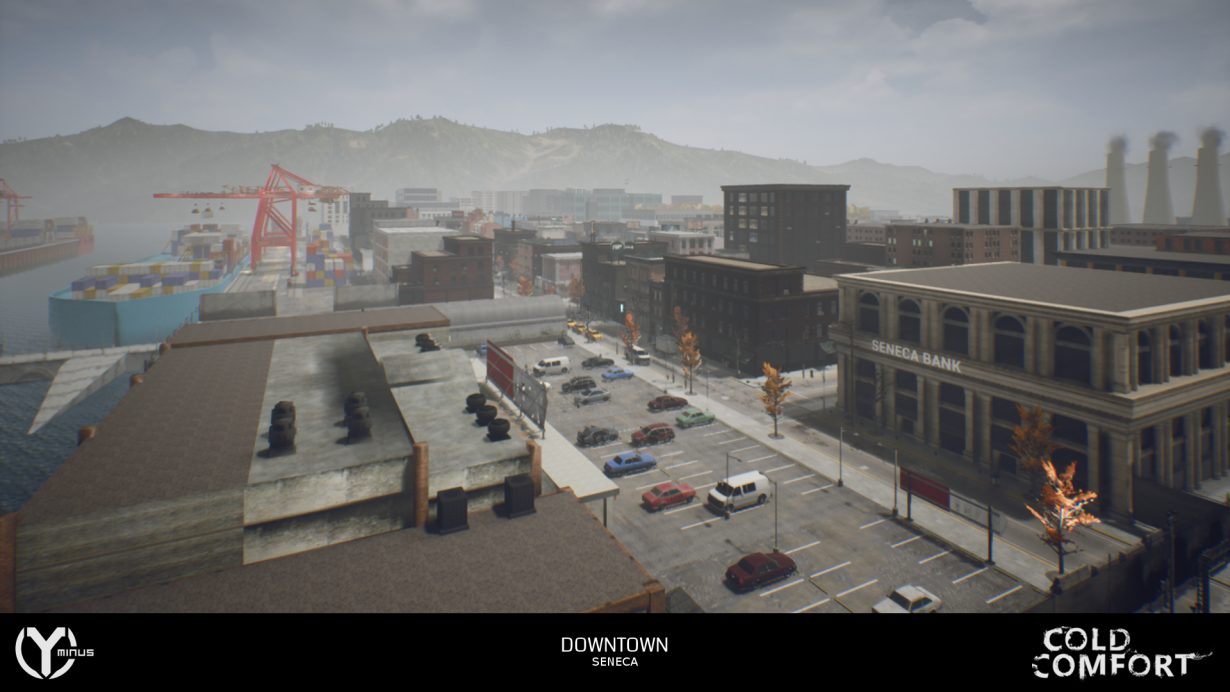 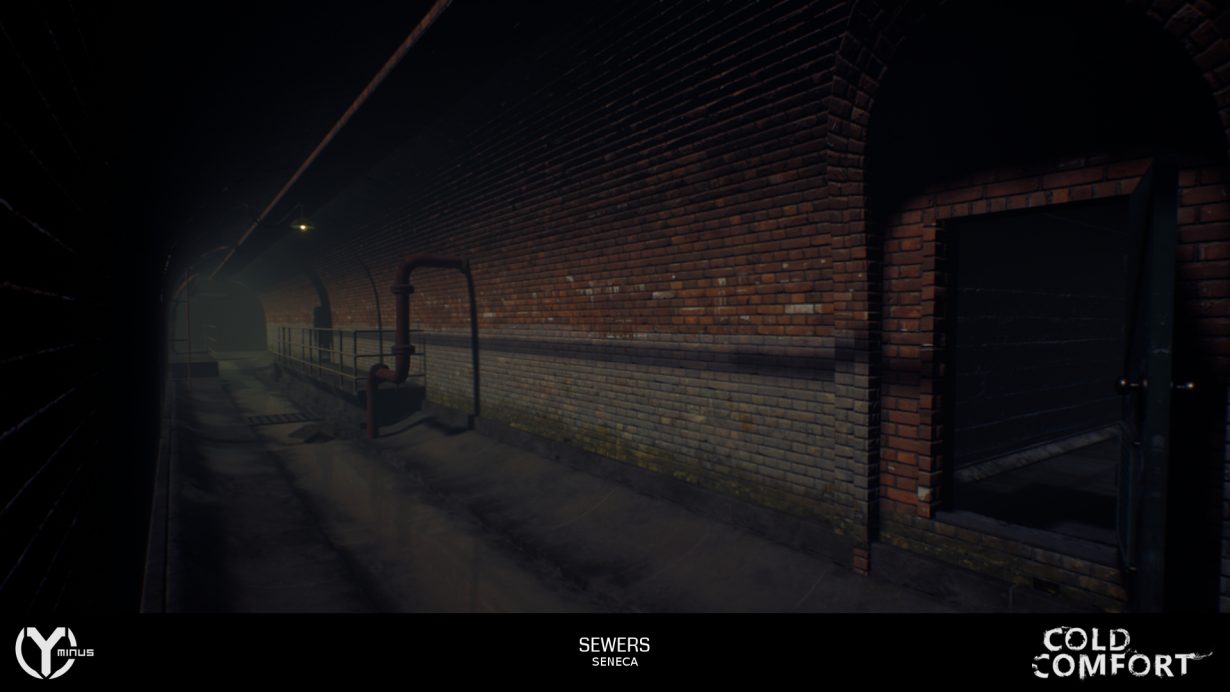 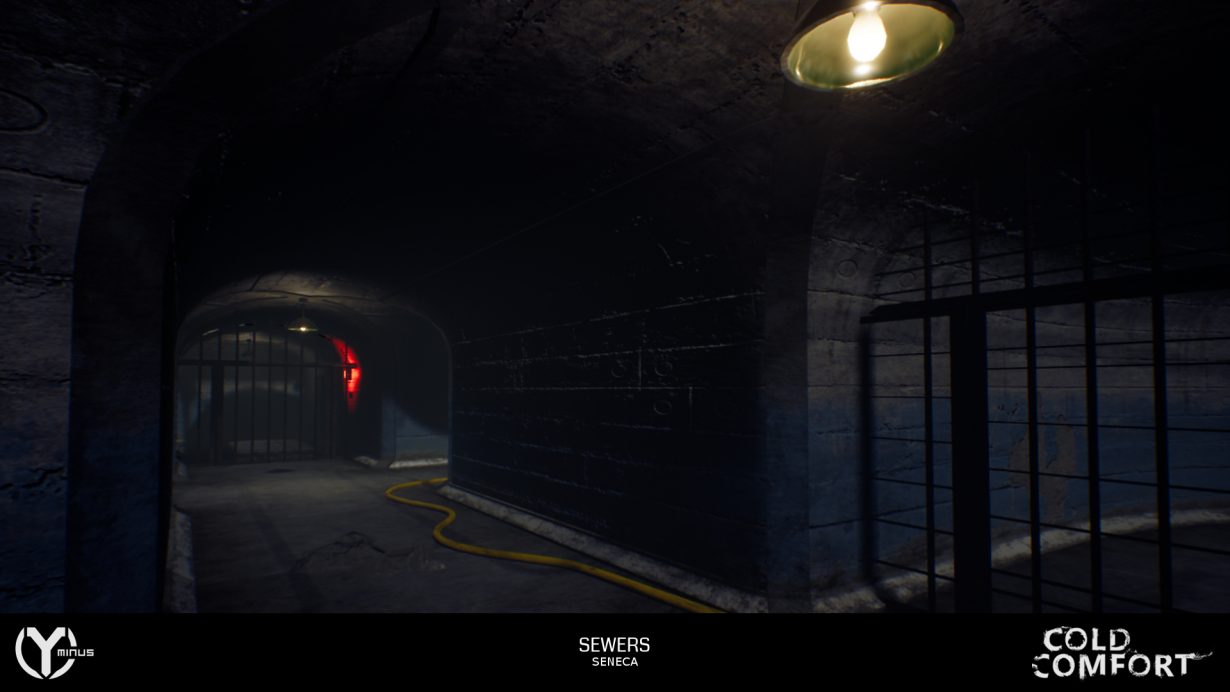 In Cold Comfort, you’ll be able to not only customize the weapon attachments for your firearms, but also change the “skins”. All of our skins will be either unlocked or given out during events, or for participation in challenges. As purely cosmetic items, these Skins are for the sole purpose of rewarding players with different customization options. For example we are currently working on a “Kickstarter Skin Bundle” which will be given out to individuals that back our Kickstarter when it becomes available. 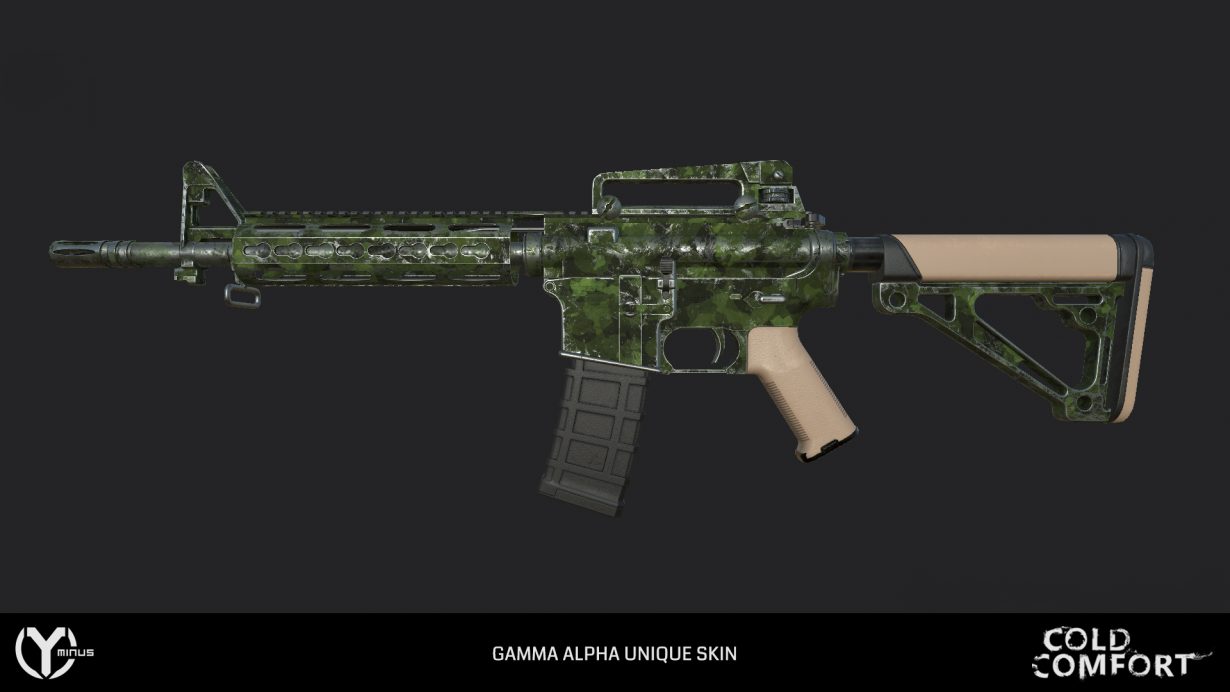 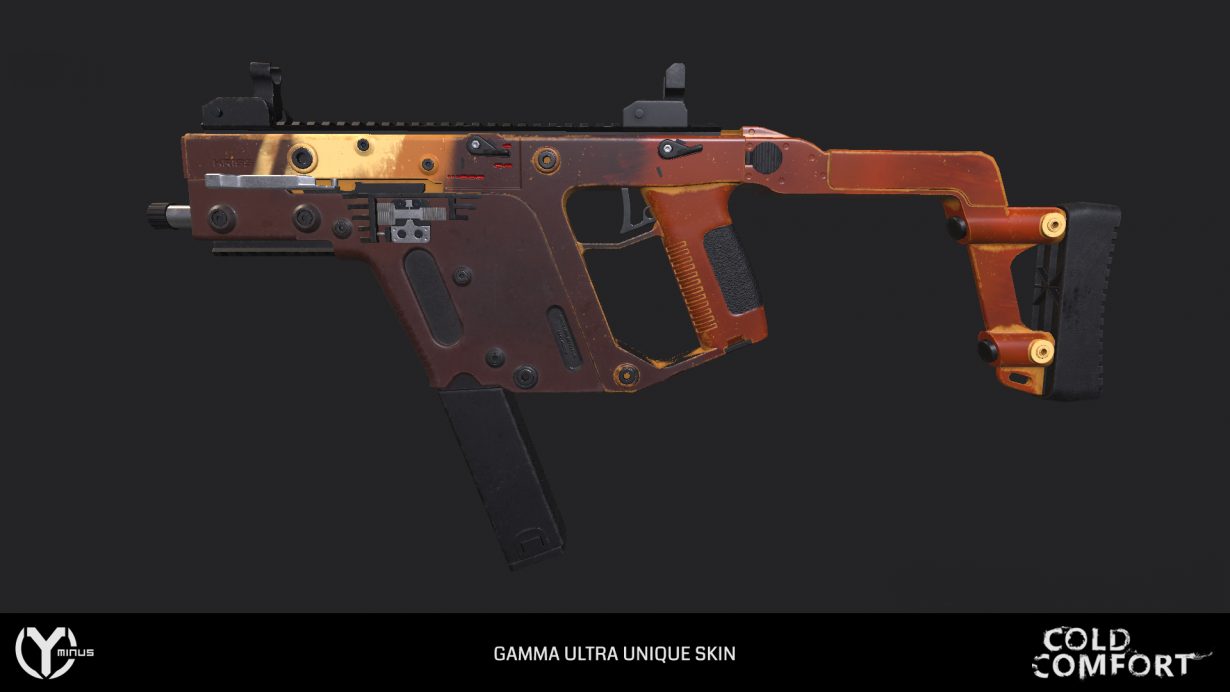 The task of an animator is to make the characters and the creatures of Cold Comfort come to life. The  riggers task  is to build the “skeleton” of the model so that we’re able to control it. It is especially fun to make monsters come to life because we can use our imagination for how they move and behave. By taking references from animals or insects and combining them with our own reenactments, we try to make them look as alive as possible. 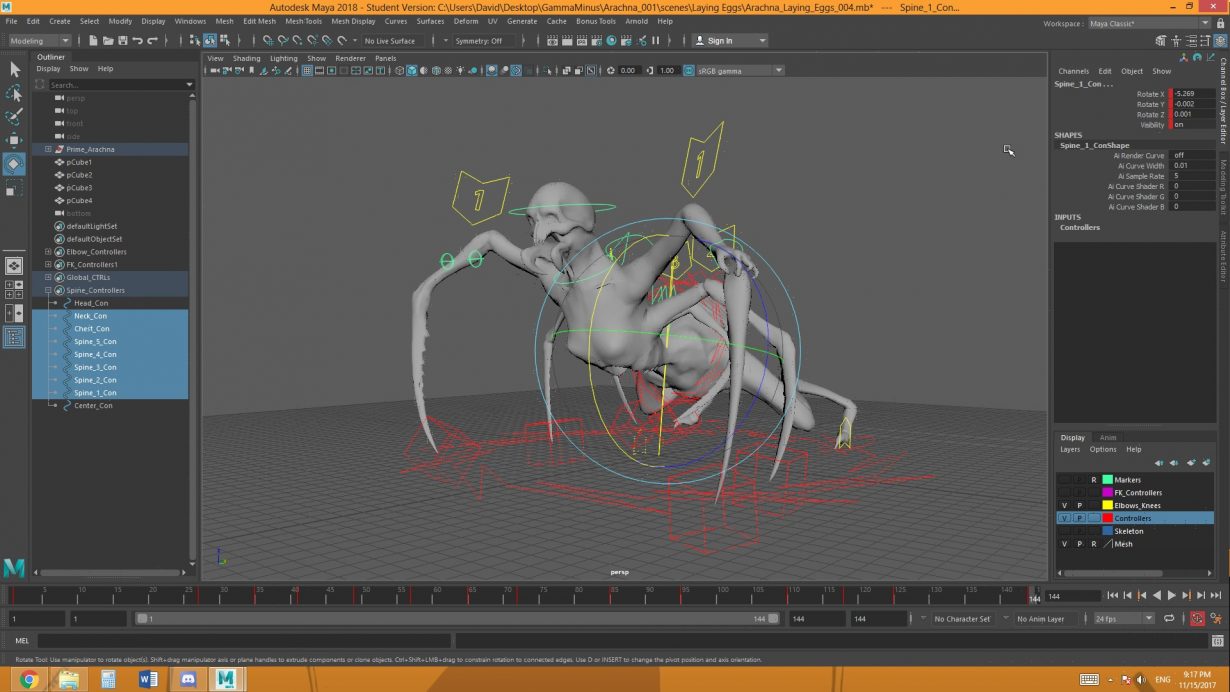 Initially, there will be 5 different Survivor characters, and 5 Gamma Prime the players can choose from, all of them providing a unique gameplay experience. A big focus during the development of these characters was identity and readability. In-game, players need to be able to recognize who is in front of them and what ability they’re using in the heat of combat, be it Pugnator preparing for a pounce or Arachna laying her spider eggs.

Character design is one of several tools to guide player experience and to communicate essential information to the player quickly and intuitively. The visual design process for CC characters started with us deeply defining the background story, in-game role and skills. Once we had thoroughly figured out our characters, we started condensing their gameplay roles and narrative backgrounds into raw concept art, which then kept being refined by our very talented concept artist until we had created characters with identity and the desired look and feel.

Picket, for example, is a nimble, mobile sniper, who prefers taking out her enemies one by one from high above. She also has a few tricks up her sleeve, being able to lay caltrops to slow down enemy movement and mark enemies and supplies for fellow survivors. Her being very secretive about her past is being reflected in the dark and mysterious design. Small in stature and equipped with a bag for storing everything she needs for survival, she likes to wear her gloves in order to shoot her rifle more comfortably.

Her pragmatic side is reflected in her hair, which she shaved off when it disturbed her vision once and made her miss a shot. We managed to find a balance of different aspects: visual interest and clarity, contrast and believability, thus creating a fun and enticing experience, where all the player’s energy and time is not wasted on distinguishing hard-to-read designs, but used to make meaningful choices and get immersed in the gameplay. 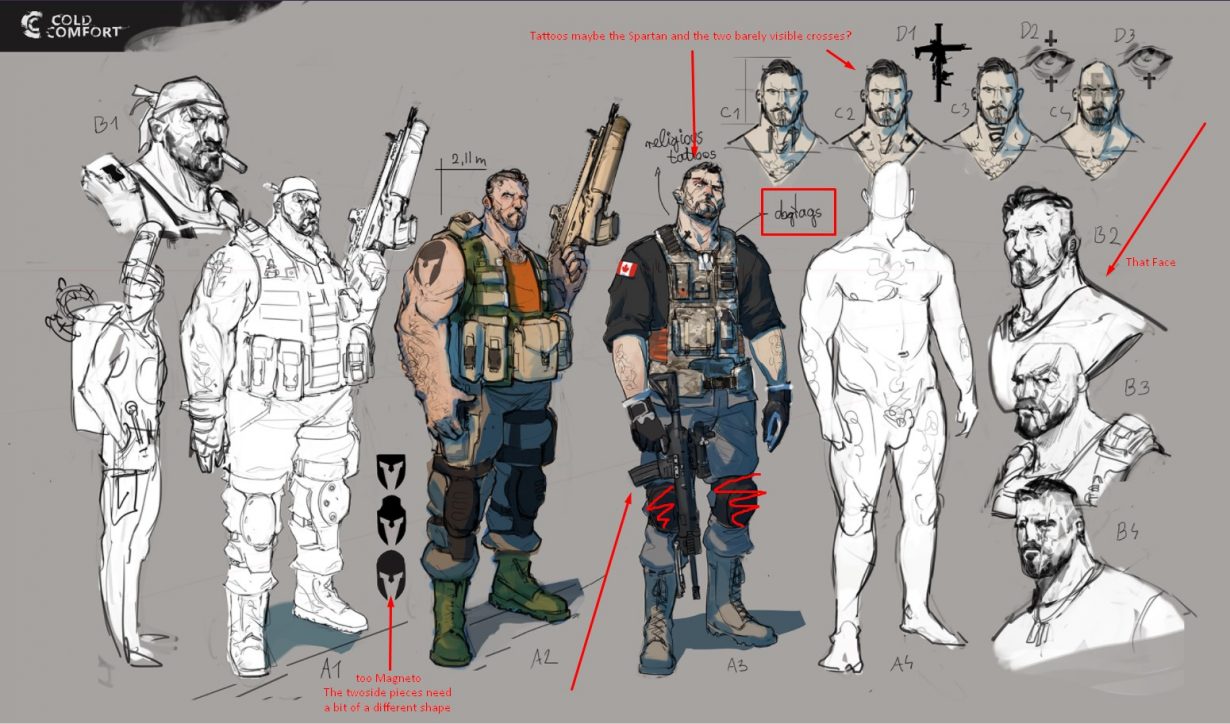 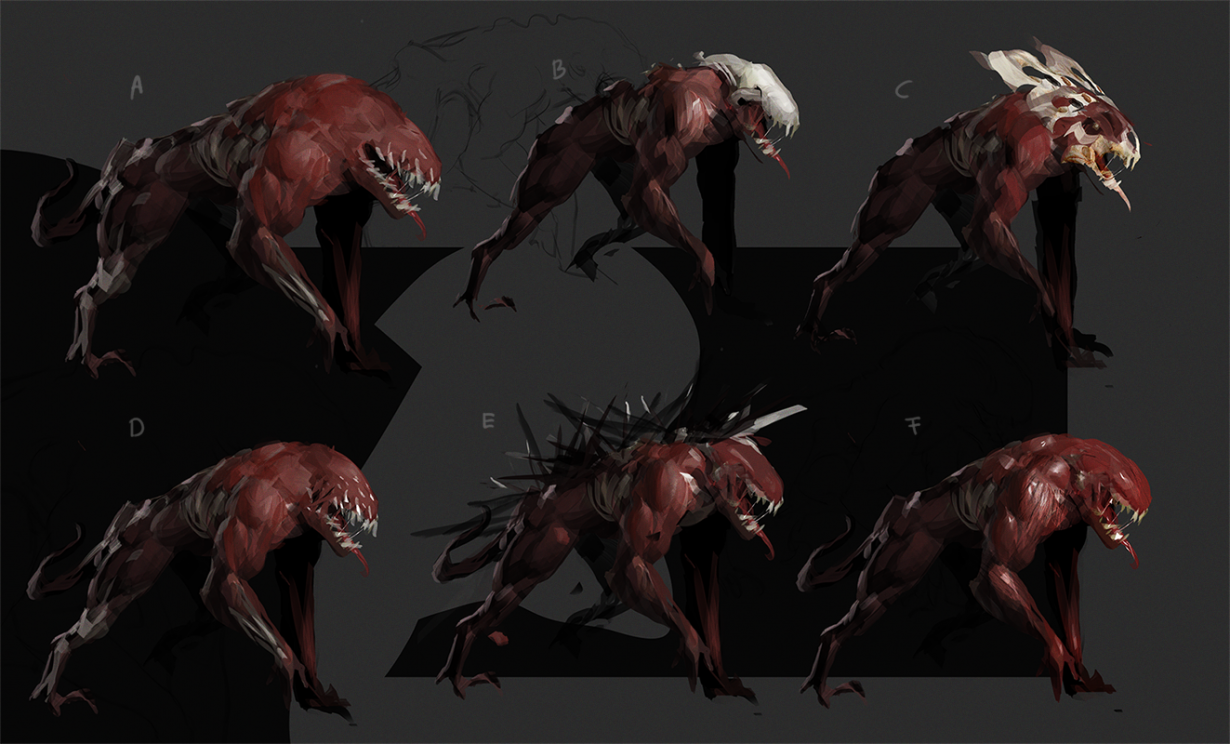 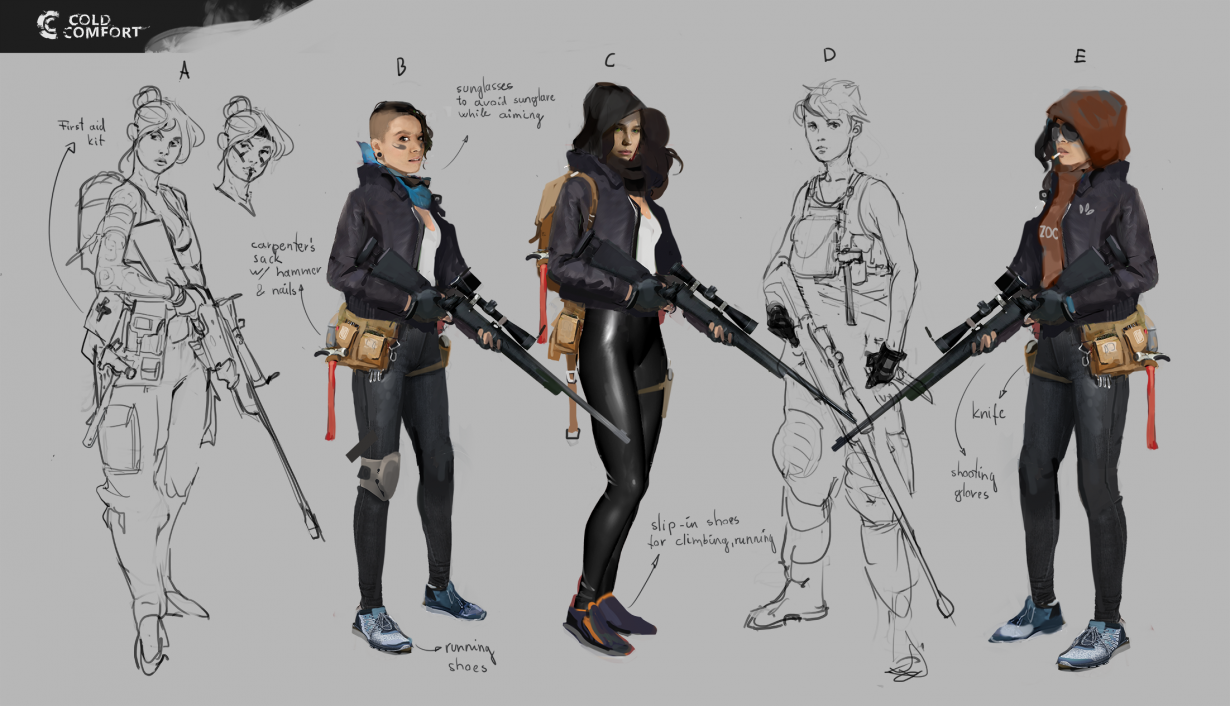 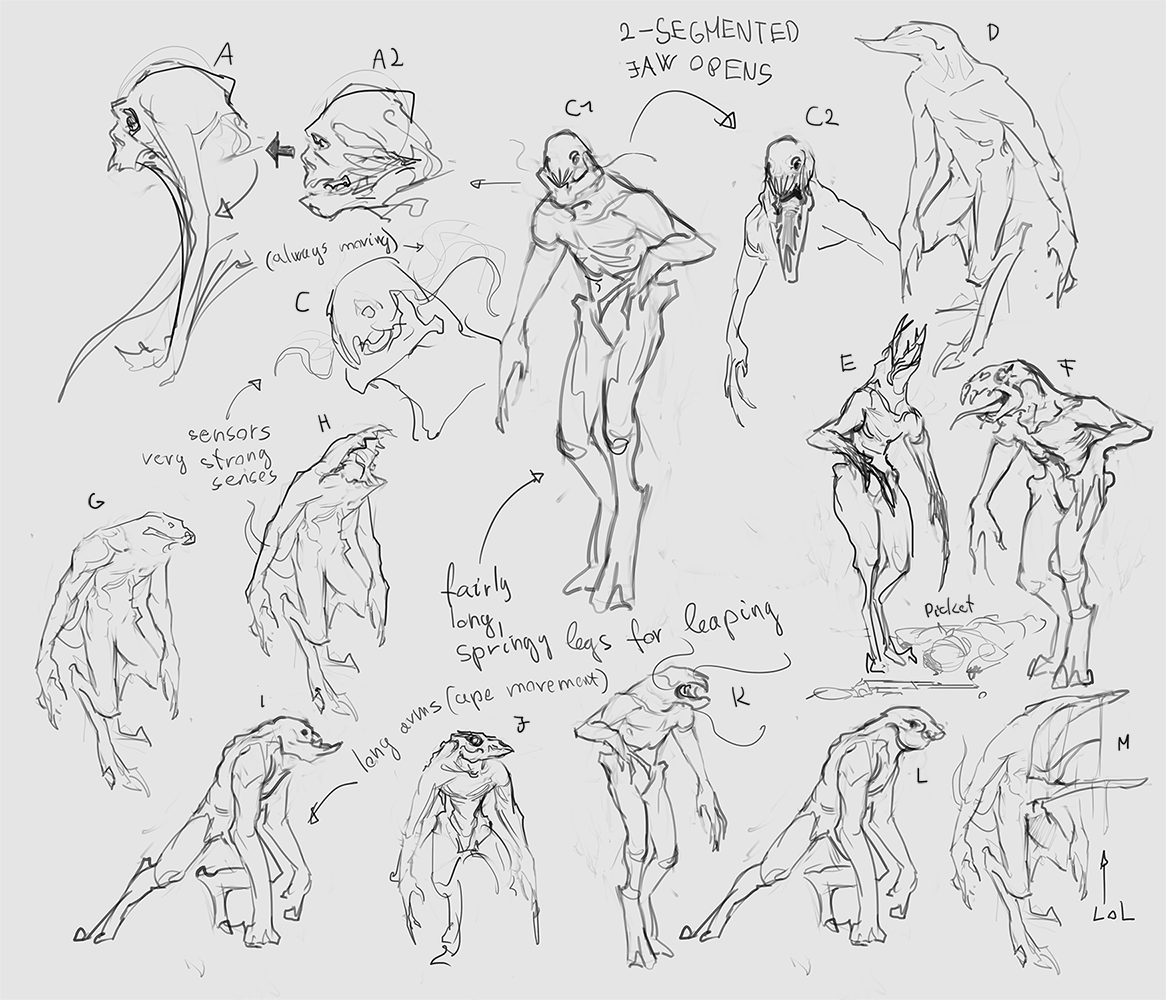 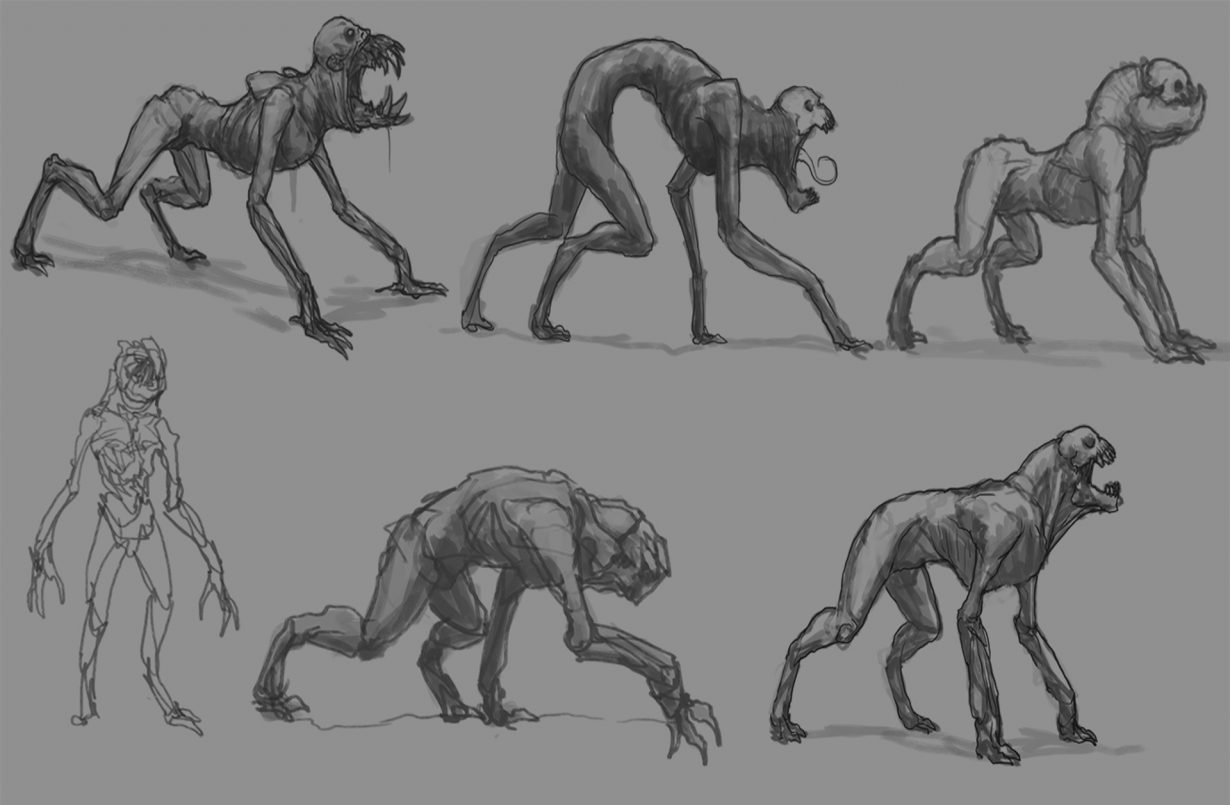 Our Concept Artist, Dam Na has been busy working not only on some more concepts for the Seneca map, but also for our 2nd map, Angers. We’ll be posting a detailed breakdown of Angers in a week or two, so stay tuned! 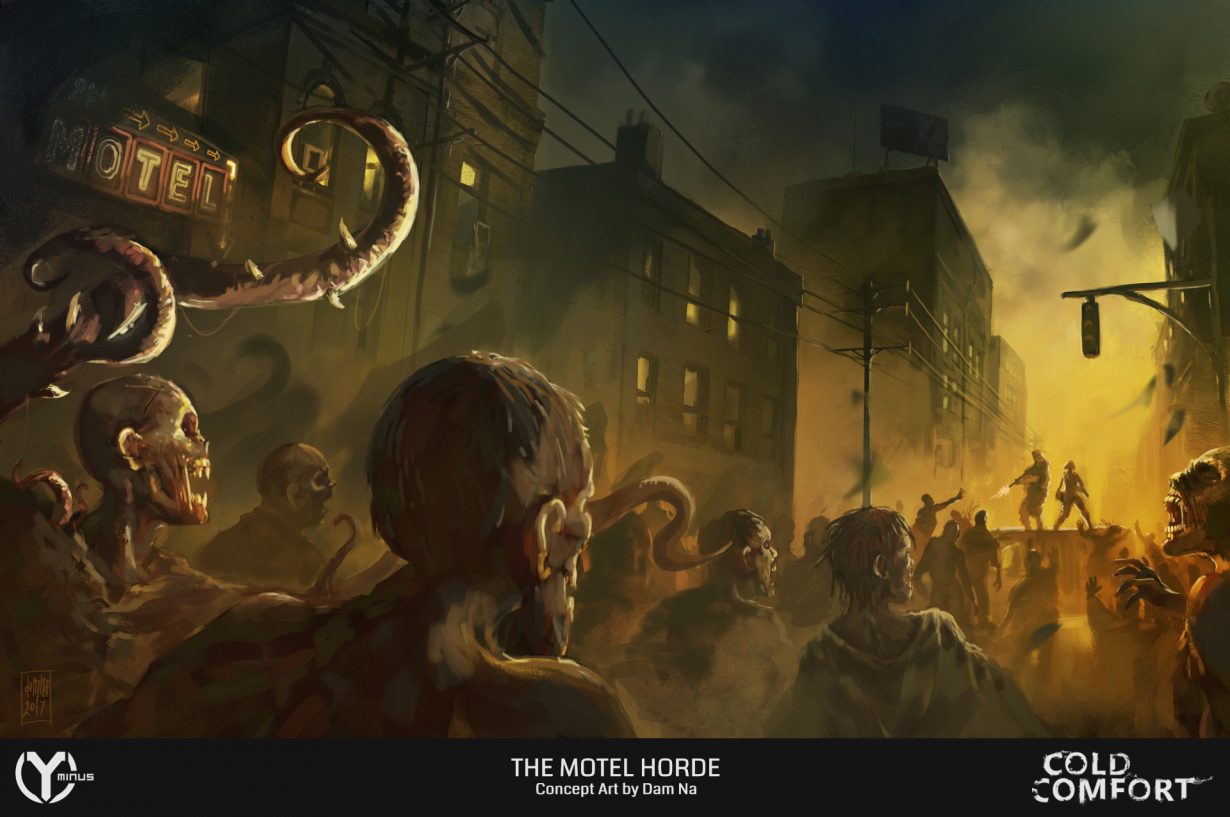 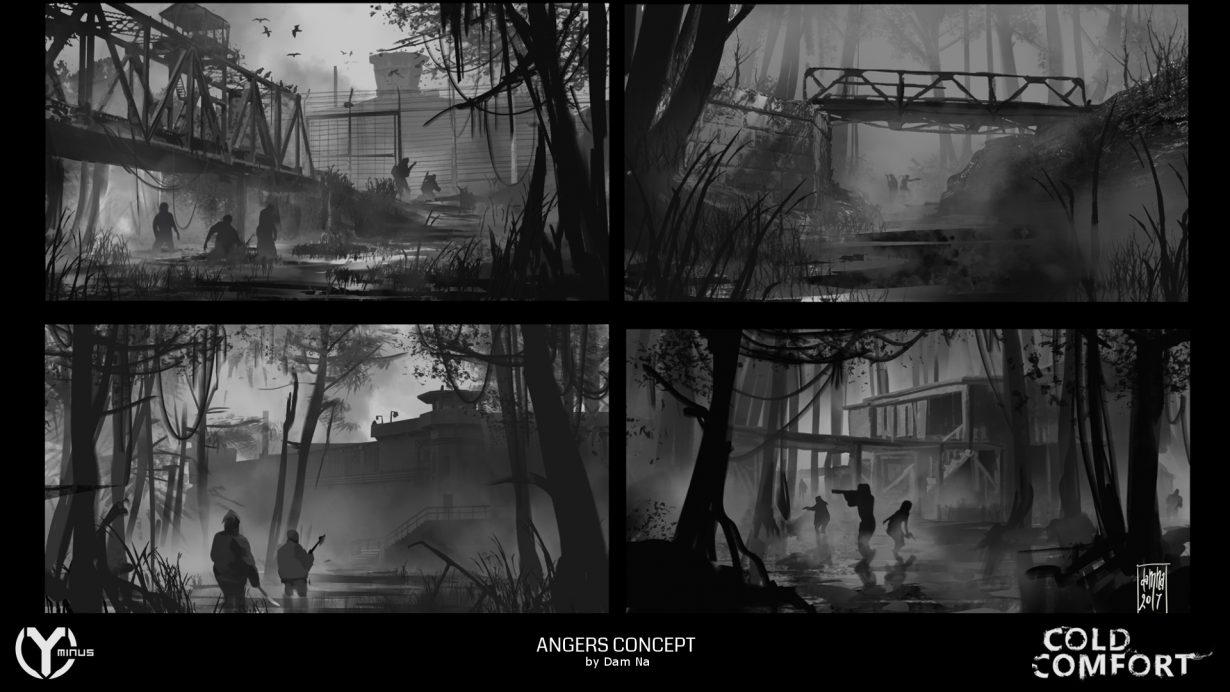 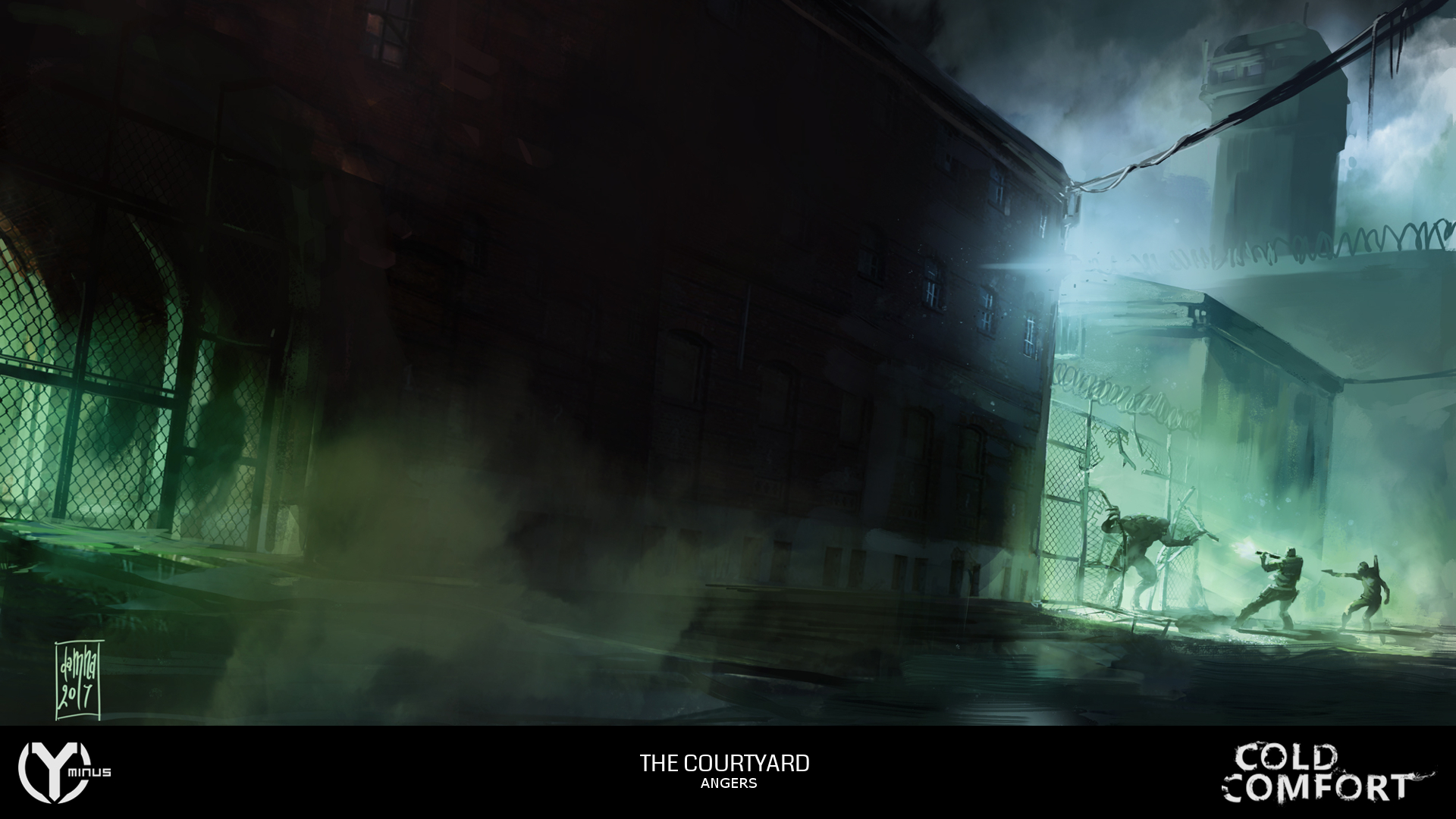 We’ve banged out a few devstreams over the course of the last few months, and we plan on making more! We usually live stream via our Twitch channel, but we’ve repackaged the devstreams for ya in an easily watchable form on Youtube below.

A Crossfade to Terror Teaser: Church
Scroll to top